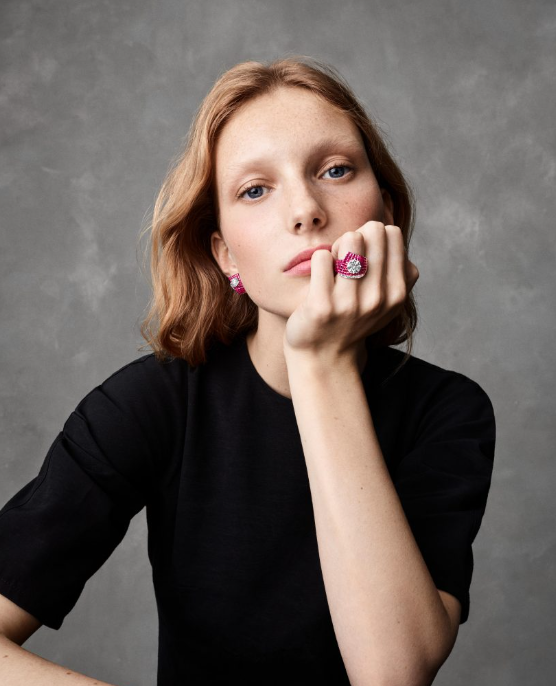 Haute jewelry is so compelling because it encapsulates narratives. There are so many stories within: How were the stones discovered? For whom are the pieces made? Whose dreams are being realized? There’s enough backstory to fill several volumes on the latest collection of one-of-a-kind jewels from Van Cleef & Arpels, “Legend of Diamonds.”

Per tradition, the 126-year-old luxury maison unveiled their high jewelry line during the couture shows in Paris this week. “Legend of Diamonds” represents a years-long journey from rough stone to glittering collection. 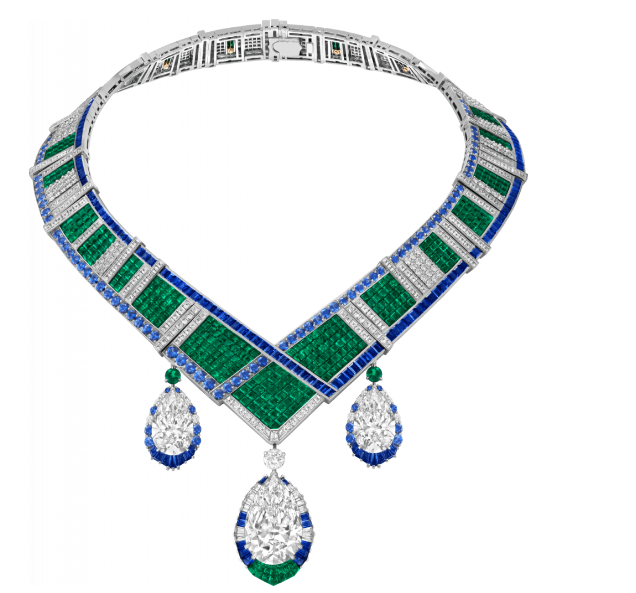 The complex Mystery setting technique is revealed on the inner part of the Chevron Mystérieux necklace, if one can take their eyes off of the three detachable grenade-size diamond pendants. White gold, rose gold, three pear-shaped diamonds, traditional Mystery Set, emeralds, sapphires, and diamonds. Courtesy of Van Cleef & Arpels.

The tale begins with the Lesotho Legend, the fifth-largest rough diamond ever mined (it was named after the South African country where it was discovered). The uncut gem weighed in at a stupendous 910 carats. It took almost a year of 3D mapping to develop how exactly Van Cleef & Arpels would unlock the wonder within. The diamond cutters then sliced, faceted, and polished the almost half-pound carbon mound into a family of 67 stones, all flawless to internally flawless. “Each one reveals the distinctive nature of the original rough stone, like clear, scintillating water,” states the release.

“This is the first time in decades that we have been involved in a project from its starting point—the extraction of the stone—to the creation of a high jewelry collection,” the brand’s president and CEO, Nicolas Bos, said in a statement. “The appearance of this extraordinary rough stone gave us this unique opportunity to tell a story around the diamond.” Almost four years after the discovery of the Lesotho, it is now distributed among “Legend of Diamonds.” 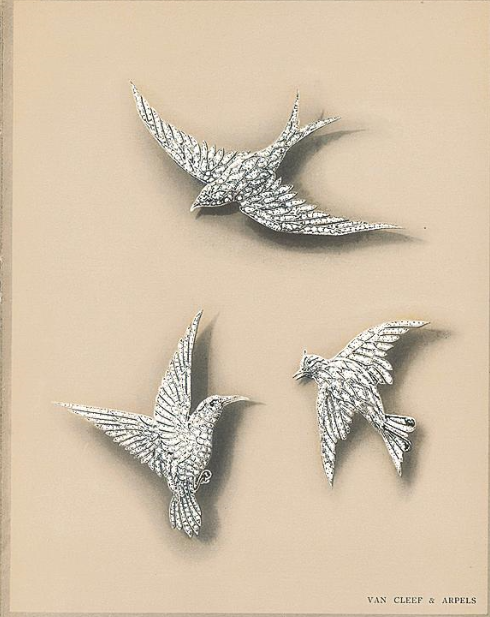 The 107-piece collection is divided into two groups, the more colorful “25 Mystery Set Jewels” and the understatedly chic “White Diamond Variations.” But the Lesotho wasn’t the only inspiration; Van Cleef & Arpels plumbed its own storied archives for fitting homages to honor the historic gem. Echoes of some of the jeweler’s “greatest hits” appear in the collection, as in a nod to the stunning diamond necklace created for the marriage of Princess Fawzieh of Egypt in 1939, as well as in riffs on Chrysler Building-inspired Art Deco earrings, for which the artisans in the Place Vendôme workshop wielded the house’s signature “Mystery Set.” Patented in 1933, the complex technique allows gems to be fixed with no visible metal prongs.

Bos summed it up thusly: “An exceptional diamond can be the starting point for an extraordinary collection that will be a milestone in the history of the maison.”